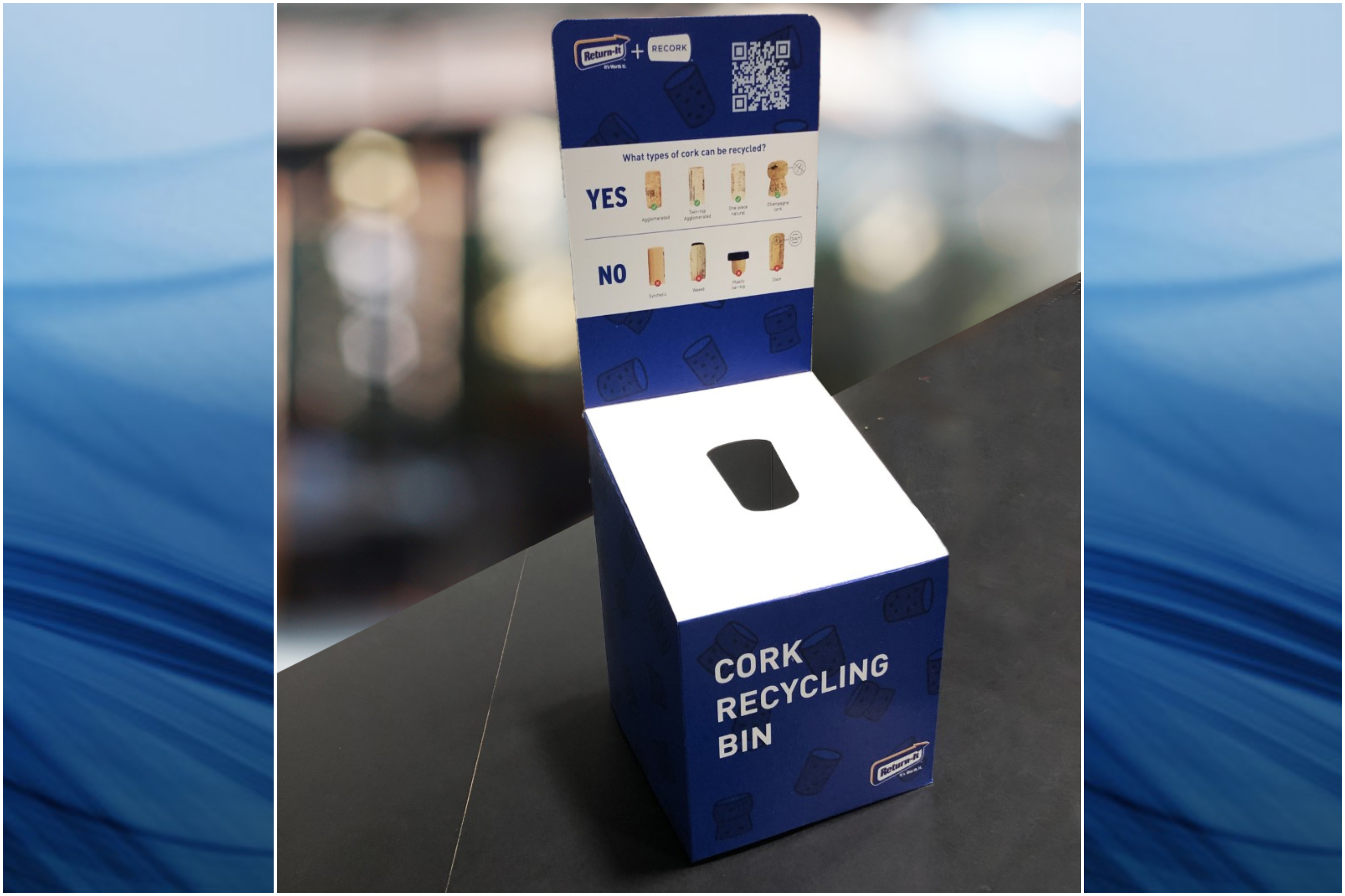 Ever wonder what you should be doing with all those wine corks?

There is now a place in Kelowna where you can take your corks and have them transformed into eco-friendly footwear.

The initiative is a partnership between Return-It, ReCORK and SOLE. Return-It is a non-profit that does beverage container management, ReCORK is North America’s largest natural wine cork recycling program, and SOLE turns used wine corks into sustainable footwear.

The corks can be dropped off at Return-It Boucherie Self Storage and Bottle in West Kelowna.

“We recognized an opportunity to collect this useful material, and work with processing and manufacturing partners to give it a new life,” Return-It president and CEO Allen Langdon said in a press release. “By utilizing our resources and systems, we are adding an exciting new element to our ongoing work around diverting material from the landfill and keeping it in our economy.

“This initiative is another example of how we’re engaged in a more circular vision of how our society can operate as we work towards circular solutions.”

Each pair of recycled cork footbeds, shoes and sandals contains between 22 and 60 wine corks. 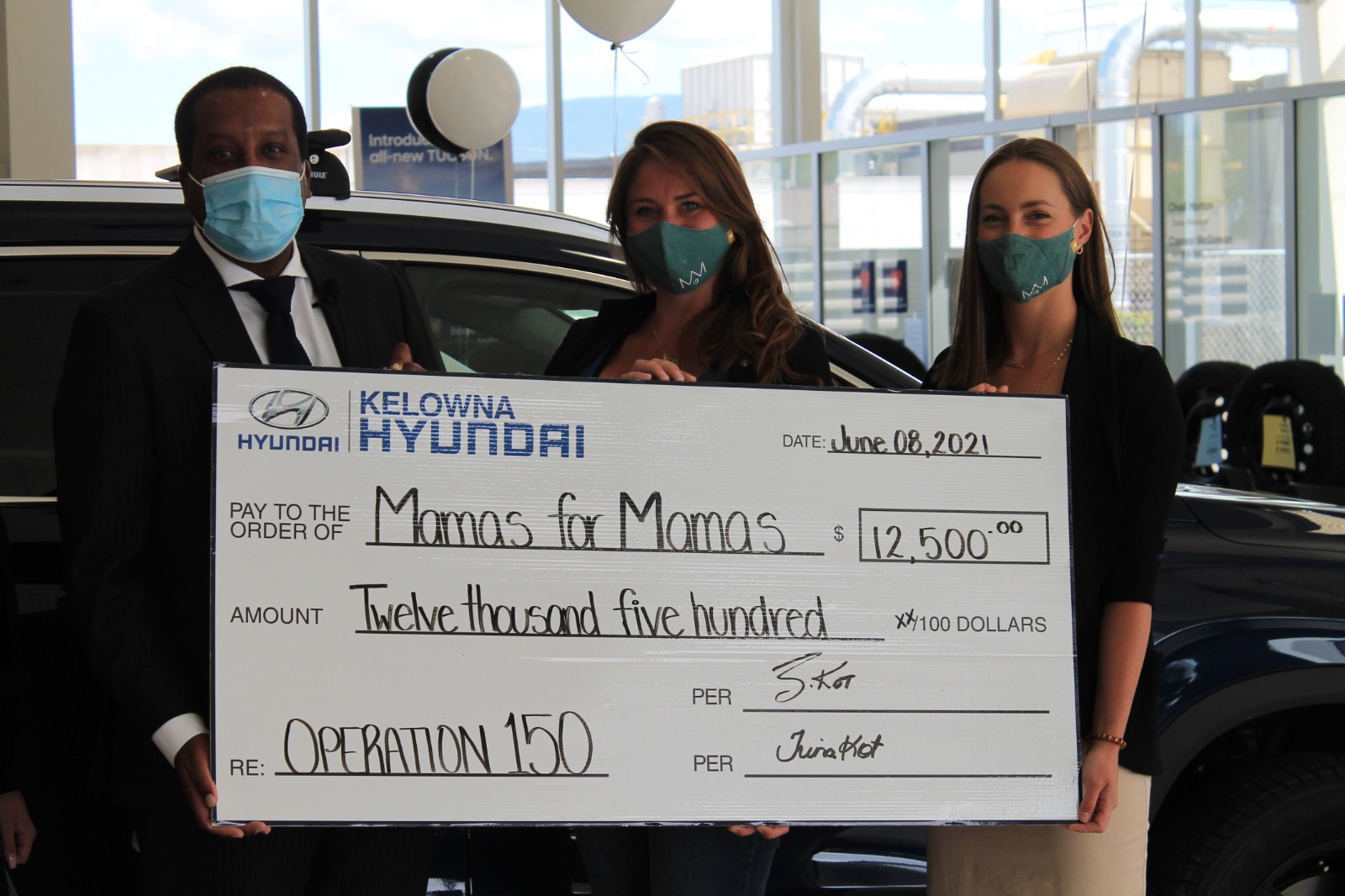 Kot Auto Group and Kelowna Hyundai has delivered once again on its Operation 150.

The mission each May is for the dealership to sell 150 cars and donate $100 per vehicle to Mamas for Mamas. The result, if reached, is $15,000 for the organization that supports mothers and caregivers in crisis by providing ongoing support to individuals and families facing various poverty-related struggles.

“Having the employees at Kelowna Hyundai make the decision about what cause to donate to truly allows them to be part of making a difference in their community,” Kelowna Hyundai president Jon Kot said. “It is our privilege to give back, and we hope to inspire our team to do so, even outside of the office.” 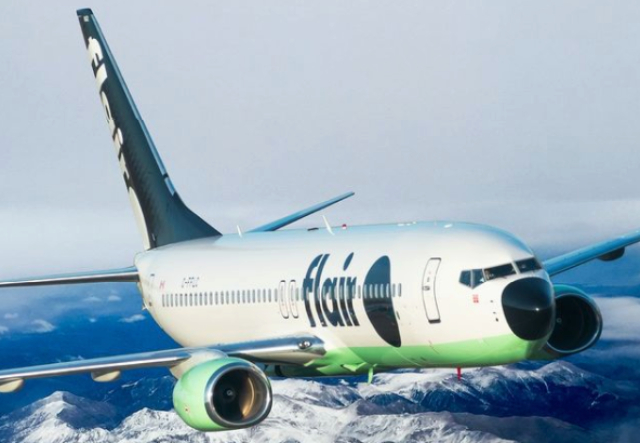 Optimiiize Kelowna has launched a charitable initiative called We Support 3.

The funds are being raised through a raffle draw of prizes that were collected from local businesses, including a night’s stay at Sparkling Hill, two round-trip tickets from Flair Air, and a $100 gift card from Train Station Pub.

Optimiiize’s goal is to run a raffle every month, all in an effort to promote local businesses while contributing back into the community.

The first draw will be held on July 5. Tickets and more information can be found here.

In under two hours, a Kamloops brewery raised $2,500 for the Indian Residential School Survivors Society.

The owners at Bright Eye Brewery were shocked when they sold out of their orange “every child matters” T-shirts the same day they launched.

“Kamloops never ceases to amaze us with the support. But I don’t think that we fully expected to completely sell out of 100 shirts in a couple hours and raise over $2,500 in one day doing so,” Bright Eye Brewery co-owner Tyler Windsor said.

In the wake of the discovery of the remains of 215 children buried at the former Kamloops Indian Residential School, the brewery had orange T-shirts made up, with 100% of the proceeds going to the IRSSS.

Windsor said the brewery has done several similar fundraisers in the past for various other organizations, but none had been quite as popular right off the bat.

Bright Eye owners felt passionate about the fundraiser because the issue was so close to home.

“In the wake of hearing such tragedy that’s happened right in our backyard in Kamloops, we thought it’d be good idea to try to give back to the community as much as we could,” Windsor told Castanet.

The general manager at Bright Eye Brewery, Rhianna Klugie, wanted to thank the community for all the support—as this is something she is especially passionate about, seeing so many have been effected by residential schools.

“It is something that’s very near and dear to my heart. Both my grandparents as well as my father, he actually attended the very last residential school in Edmonton. So this is something that is definitely very, very close to home for me. So I can’t thank the community enough for how much it means to us that you come out and support this. With absolutely no get back to yourself. So thank you very much,” Klugie said.

The brewery will be restocking the orange shirts this week, and customers can pre-order them online now.

Bright Eye will continue the this campaign for the rest of June, as well as they have started selling “every child matters” stickers, which can be purchased for a $5 donation, with 100% of the proceeds also going to the IRSSS. 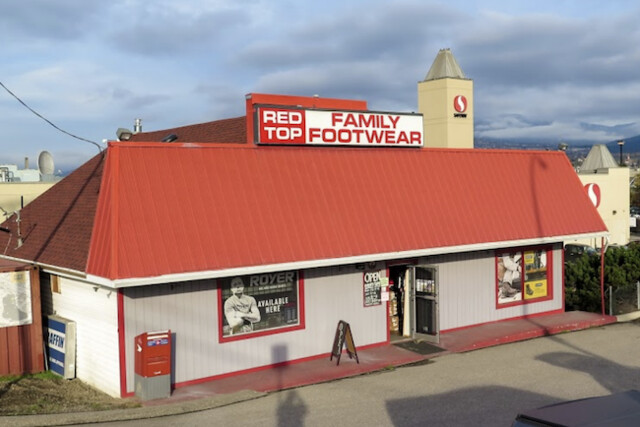 A Vernon footwear company has provided a big boost to three local restaurants at a time when they could use it most.

The owners of Red Top Footwear on 43rd Avenue and A Shoe Story on 30th Avenue have given $2,000 cheques to three restaurants to help them through tough COVID times.

Restaurants have been hit hard by government-imposed pandemic restrictions, which were eased somewhat only last month.

Trudy Dionne at the Red Top store says customers selected the restaurants to receive the helping hand by voting for their eatery of choice.

The slips were then counted, and those with the most votes were blessed with the windfall.

“We received a lot of support from the community during COVID, and we knew some restaurants were struggling in town because of the mandatory closures they were placed under,” Dionne said.

“We just wanted to show our support and let them know we appreciate having them.”

With one in five children living in poverty in the Central Okanagan, the $60,000 that was raised this year at the virtual YMCA Cycle for Strong Kids Your Way event will help give children less fortunate direct access to Y programs.

Over 75 participants from the community, business teams, and YMCA staff ran, biked and hiked on May 30 in support of the Y’s Strong Kids Campaign.

“We are blown away by the generosity of our supporters,” YMCA fund development officer Wendy Wright said. “Charities rely heavily on donations raised at community events and due to the cancellation of all gatherings over the last 14 months, organizations like the Y had to reimagine how to safely hold vital fundraisers. Thanks to Cycle participants and donors we can make a huge impact for low-income kids, giving them access to our Y summer camps, after-school and youth leadership programs, swim lessons, health memberships and so many other life-changing programs many families simply can’t afford on their own.”

Those partaking were getting creative with their virtual fundraising abilities. Among the activities were family hikes, rail trail bike rides, full marathon runs, outdoor Zumba sessions, and bike rides between the H2O Adventure and Fitness Centre, the Downtown Y and the Kelowna Family Y.

Another gift for Towne Theatre
Victoria Femia - Jun 01, 2021 - Get Involved 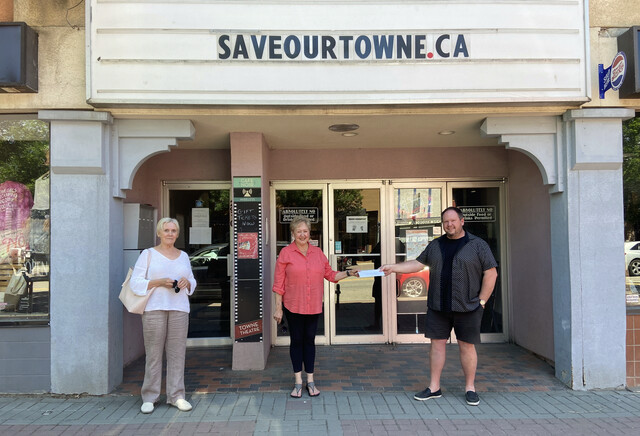 Hit hard by closure forced by the COVID-19 pandemic, Onsorge donated $2,500 to the Save Our Towne project.

“This is an easy project to get behind, and I challenge my real estate colleagues to join in,” Onsorge said.

The Okanagan Screen Arts Society is raising money for future operation and renovation of the downtown theatre.

“I want to thank Steve Onsorge for supporting the Save Our Towne project as well as the community for the overwhelming support we’ve received,” volunteer Judy Korol said.

Combining GoFundMe donations with community contributions, the Save Our Towne website says the society has collected a total of $73,960.

“As supporters of the Greater Vernon community, we need to value the legacy of the Towne Theatre as a local entertainment institution,” Onsorge said.

With matching federal grants, the society hopes to double the donations.

The theatre opened in 1929 in Vernon’s downtown core. The previous operator of the theatre retired after being in the movie business for decades and handed the keys to the non-profit Okanagan Screen Arts Society. 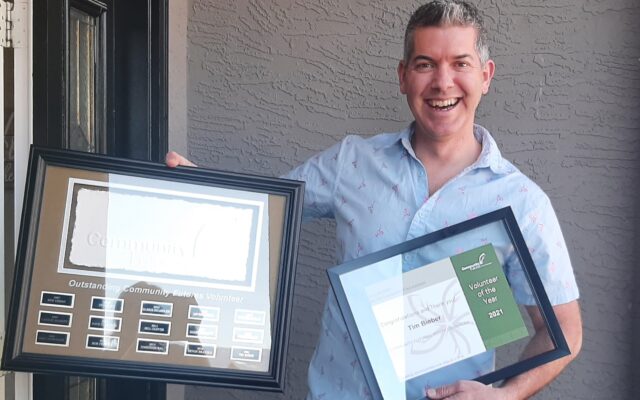 Tim Bieber has plenty of experience launching and managing media and tech startups, so now he is giving back to his community by spreading his vast knowledge on that topic.

He has clearly made a huge impact in a short period of time, because Community Futures North Okanagan named him its Volunteer of the Year.

“We are very grateful to Tim for sharing his valuable time and expertise to improve and enhance the organization and the community we serve,” CF North Okanagan executive director Leigha Horsfield said in a press release.

Bieber started volunteering his time for the organization only in January 2020. He is an active director and member of the board resource, diversity and Regional Relief Recovery Fund committees.

“I was drawn to how progressive CF North Okanagan was in their approach to economic development and supporting the modern-day community needs,” Bieber said. “In particular, I was impressed that the organization was stepping up to create a local community accelerator innovation centre space for the growing number of entrepreneurs in the area.”

Bieber, who has launched five media and technology companies, has also thrown his full support behind the Vernon Innovation and Entrepreneur Workspace, also known as The View.

“The VIEW will help foster and incubate the next generation of entrepreneurs to help our community thrive,” he said. “I firmly believe this is going to be a huge driver in sustainably growing our region.” 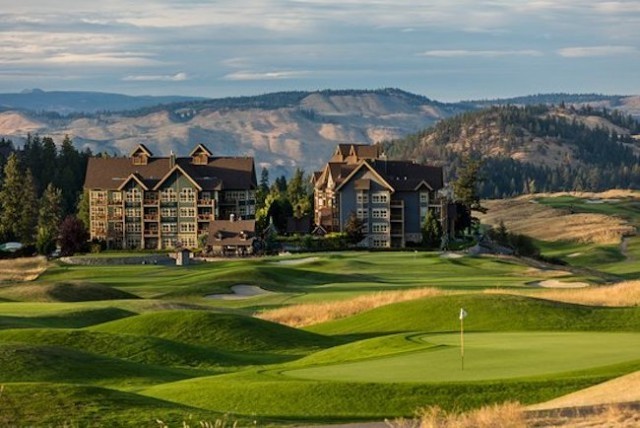 The 12th annual Vernon Jubilee Hospital Foundation Charity Classic golf tournament will be held Aug. 29, and organizers are putting out the call for sponsors.

The major fundraising event, which is one of the North Okanagan’s premier tournaments, will be held once again at Predator Ridge. The tournament has raised more than $2.3 million for the Vernon Jubilee Hospital Foundation since it was first held in 2009.

The tournament will be full of contests, food and prizes, and a virtual livestreaming event, called The 19th Hole, will follow. It will consist of an online auction, take-home dinner and special guests from the front line.

The VJH Foundation Charity Classic is seeking sponsors at a variety of levels, ranging from $600 to $10,000.

More information about sponsorship can be found here. 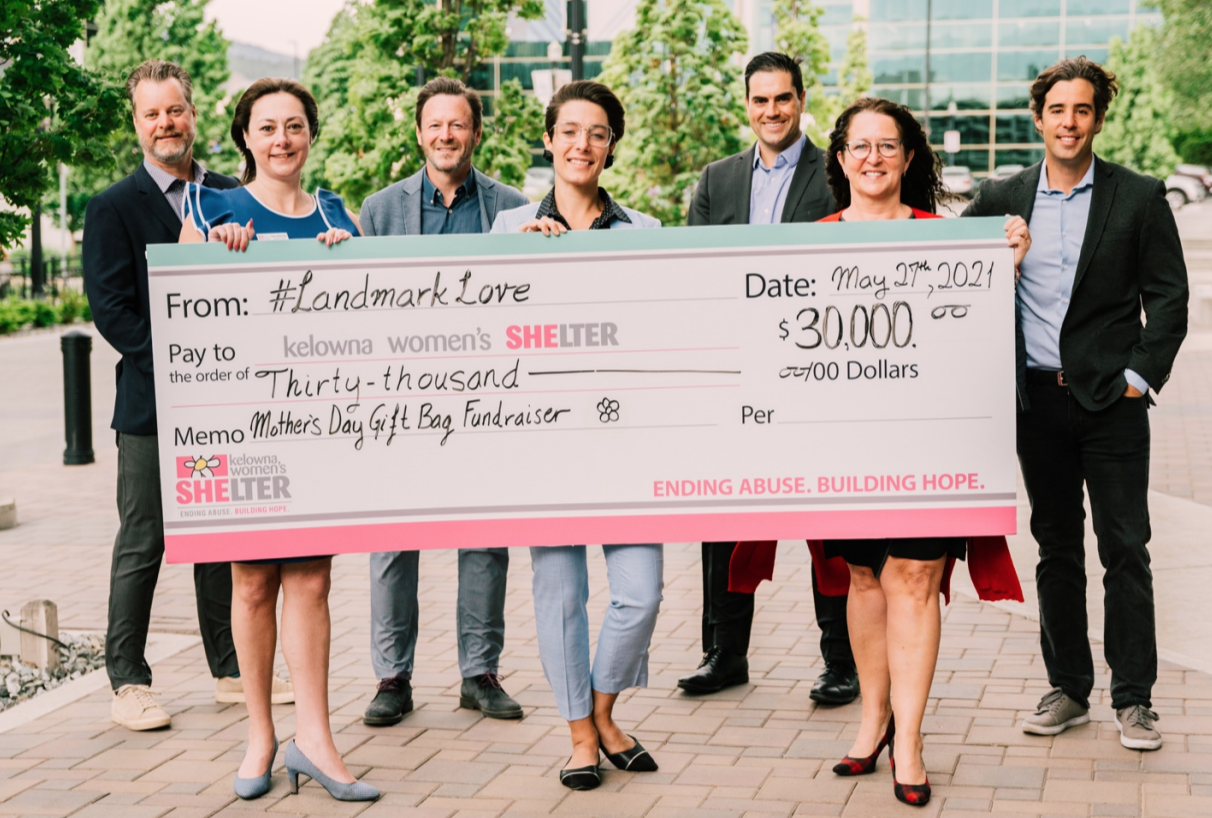 A Mother’s Day fundraiser recently brought in a whopping $30,000 for Kelowna Women’s Shelter.

The second annual #LandmarkLove Mother’s Day Gift Tote fundraiser sold out in a record-breaking 11 hours and raised $15,000 in the process. Stober Foundation matched that tally, bringing the total donated amount to $30,000.

Details Design Inc. ran the event with sponsorship from Landmark District, Crowe MacKay and Stober Group. It was a drive-thru event this year, and they sold community curated gift totes valued at more than $75 that featured a bouquet of tulips from Lora + Christy Real Estate Team, a variety of local goodies, gift certificates and the opportunity to win multiple grand prizes.

“On behalf of the Stober Group team and Landmark District, I wanted to express our thanks to everyone who supported this year’s Mother’s Day drive-thru, including patrons, participating businesses and our title sponsor, Crowe MacKay,” Stober Group CEO Dave McAnerney said in a press release. “We are so pleased to be able to make this meaningful donation to the Women’s Shelter at such a critical time. Giving back to our beautiful community is a core value for the Stober Group, and we are so encouraged by the social responsibility demonstrated by so many great companies within the Landmark District. Together, we can really make a difference.”

All Get Involved Stories