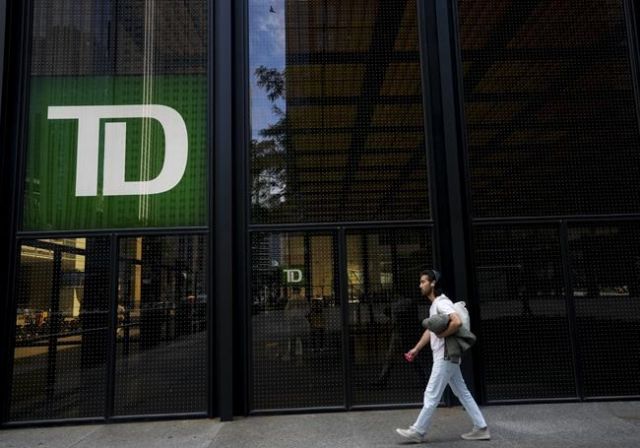 TORONTO — TD Bank Group had earnings climb in the fourth quarter, despite setting aside more money for potentially bad loans, as it benefited in part from higher interest margins on its loans.

The bank, with a substantial deposit base that gives it access to cheaper funding, has benefited more than some other banks from rising interest rates.

TD’s margins rose both in Canadian and U.S. banking, along with growth in average loans up 9.5% and 11% respectively from a year ago, to help drive earnings in the segments.

“We had record earnings in Canadian personal and commercial banking and a record quarter in the U.S. retail bank,” chief financial officer Kelvin Tran said.

The bank has also continued to invest in growing its deposit and client base, with expenses up 10% in the quarter compared with a year ago including on staff, despite concerns of a slowdown ahead.

“We saw it as an important opportunity for us to invest strategically in our people in our businesses,” Tran said. “We’re putting more bankers on the street, more advisors on the street to help our customers as it’s a very challenging environment and we want to be there for them.”

He said the bank remains nimble and could respond to changing economic conditions as needed but that it’s still focused on growth.

One of the biggest sources of growth for the bank will be its pending US$13.4 billion acquisition of First Horizon bank in the U.S., but it may have to wait longer as it is now guiding a close of the deal in the first half of the 2023 fiscal year, rather than the first quarter as it previously said.

Tran said that the timing of regulatory approvals is not within its control.

“We continue to work toward closing the transaction, and working very hard at it, and we’re making progress.”

Financial moves in anticipation of the acquisition, including a hedge against interest rate volatility and the sale of some shares of Charles Schwab Corp. to fund the deal, made for a significant top-line earnings growth for the quarter at $6.67 billion, up from $3.78 billion in the same quarter last year.