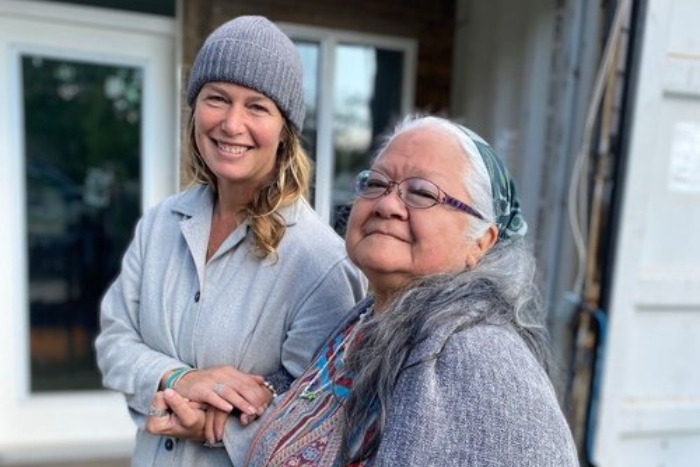 Azhen Sanctuary, co-founded by Jaymie Friesen, is a 160 acre Indigenous-owned sanctuary, retreat space and land regeneration project in Rock Creek, B.C., just one and a half hours south of Kelowna.

Friesen, along with his brother, Shelby, were inspired by their Indigenous heritage to open a space where Indigenous cultural events could be held for the community, including ceremony and education.

This came after the brothers and their mother found it difficult to find connections to their culture growing up. Their mom was a part of the Sixties Scoop—a mass removal of Indigenous children from their families into the child welfare system. Though their lineage is from the Grassy Narrows Band in Ontario, the Sixties Scoop brought the family to B.C.

They wanted to make it easy for others to find these types of events, so they created Azhen Sanctuary. Azhen is an Ojibwe word that means “to give back.”

However, the exchange for these types of events tends to be a controversial subject. Many folks don’t think any cultural event should have a price tag. Others understand it to be a deeper conversation about how Indigenous knowledge keepers, space-holders and leaders can continue to pass on important cultural lessons in an economically viable way.

Chief Clarence Louie of the Osoyoos Nk’Mip Band, one of the most prominent Indigenous leaders in North America, talks about the high financial costs of putting on such events and stresses the importance of Indigenous peoples finding ways of being financially independent in his book, Rez Rules.

Jaymie says he’s struggled with this question a lot. When he asked his elder, the late Vern Shanoss, what his thoughts were, he said “Back in the day the person leading the ceremony was the wealthiest person in the tribe. People brought horses as offerings. Now our knowledge keepers are finding it harder to survive and focus on their role in the community.”

Jaymie says “there is a lot of controversy around whether people are allowed to charge for events. Every tribe is different. There is not one right or wrong way. But we’ve worked hard to be in a position now where we can afford to host these events where all are welcome for free or by donation, and I’m excited for that. Not everyone is able to offer that.”

Shanoss recently passed away, and one of the first events Jaymie, Shelby and the Azhen Sanctuary team will be conducting is the building of a tipi in his honour, donated by Yvette Moore and Harbour House Yoga, as well as hosting a potluck.

Azhen Sanctuary hosts a variety of workshops and retreats. All dates for 2023 events, including any drum making, drum circles, and sweat lodge ceremonies, will be released Dec. 1.

Check the website to get notified, or book a visit for the spring through fall.