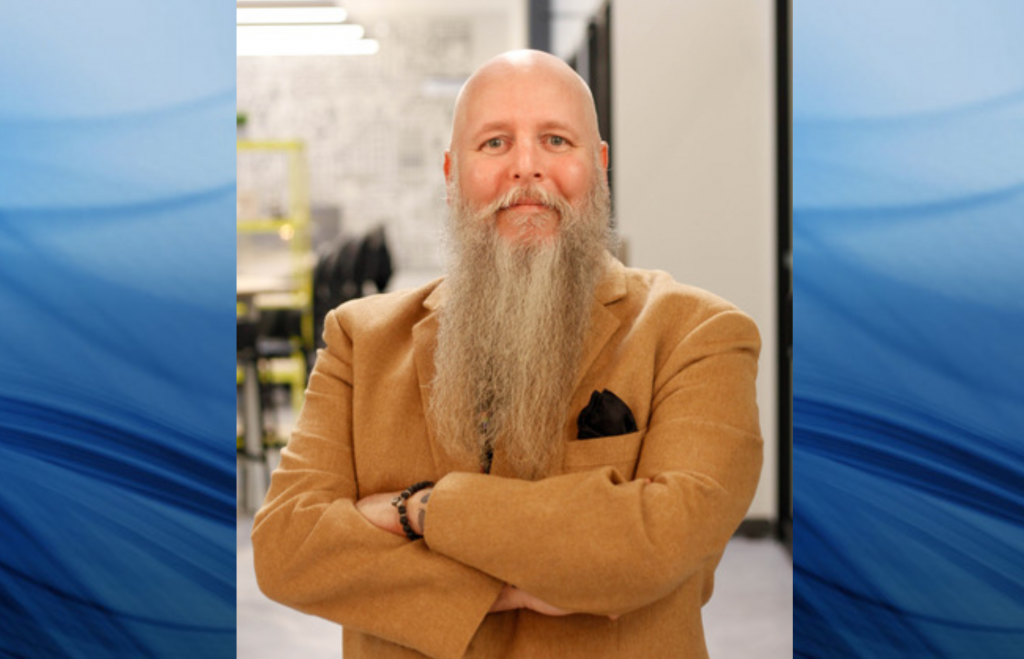 When Matt Stewart delivers this line in a recent LinkedIn video promoting careers at the Staples Studio, where he is the community manager, I am reminded of the warm and encouraging impression of the man when I first saw him as a co-host for Balance Well-Being’s Storytelling Tuesday a few years ago.

Stewart, an executive coach with more than 20 years of experience, exudes acceptance, inclusiveness and positivity. His sense of hope and compassion is a salve in these stressful days of division and our demands for perfection. But that doesn’t mean he suffers excuses or bad behaviour. While he can parry ignorance and small-mindedness with class and poise, he is equally capable of blunt and salty language, as he boldly demonstrates in another video: “The right s–t, for the right why, for the biggest impact.” And he’s not afraid to employ a well-placed F-bomb, too. After all, activating potential is not for lightweights, and he activates a lot.

Stewart—a.k.a. “Community Cultivator,” “Connectorpreneur,” “Den Mother,” and “The Bearded Leader”—has lived all over the world and advised senior leaders across North America in the worlds of finance, film, health care and major sporting events such as the Olympics, Paralympics and the Pan Am Games. He is also a TEDx speaker who has also shouldered profound personal battles, living with leukemia and the long-term effects of COVID-19, while actively supporting many communities, including the LGBTQ community, of which he is a member. I also call him an inspiring survivor.

Matt, tell me about your role at the Staples Studio, and the role of the studio in our community. It’s such a cool space there.

Studio is an exciting new pivot for the trusted office supplies store of Staples. We knew we had to adapt to the changing way folks were doing business, so we became The Working and Learning Company. I am the community manager of Studio, which is a community space that offers 24/7 access to co-working at an office that’s nothing like an office, but is inspired by the beauty of Kelowna’s surroundings, full of creative ideas and a sense of camaraderie shared by like-minded entrepreneurs, students and business professionals alike. It is a new approach to co-working with community at its heart; access to hot desks and meeting and event spaces across North America. My role goes beyond just managing the day-to-day operations and is more focused on cultivating a community experience that is tailored to help our members work, learn and grow.

Tell us where you are from and what set you on your journey of coaching and connecting?

I was born and raised in Hamilton, Ontario, and growing up I went to elementary school, high school and university all on the same city block. After I graduated it was important for me to see the world beyond just Steeltown. I moved around a lot, living in Tokyo, Australia, Vancouver and Calgary, to name a few spots. How I got into the world of coaching was really by accident. While I was working on the Vancouver 2010 Winter Olympic Games, I was headhunted by BMO Bank of Montreal to become a senior facilitator, and once the Games were over I had the opportunity to travel across North America training and coaching executives. It was through the connections I made travelling for the bank that I was able to establish my own coaching practice.

What inspires you most about people—in work and in life?

People who make an impact. I am most inspired by those who focus beyond just the monetary measures of what they do and see their work through the lens of social and environmental impacts as well as financial ones. The folks who are purpose driven in generating positive, measurable, social and environmental outcomes alongside a financial returns excite me the most in work and in life.

Describe what you feel when you know you’ve connected with a person or a community and sense an inner shift. Can you recall an experience that moved you deeply and stuck with you?

An experience I had in a TikTok live recently is the perfect example of what you are asking. I didn’t know much about this new social media platform. To be honest, I thought it was just a lip-synching app for kids to post silly videos. That misconception all changed after I entered a TikTok live of an Indigenous grandmother from a reservation in Saskatchewan who was on a mission to walk across Canada to raise awareness for MMIW (Missing and Murdered Indigenous Women) and bring healing to the families impacted by MMIW.

This was the first time in my forty-six years that I had borne witness to the pain, suffering, life, loving and living of people I’d never bothered to learn about. It is a poignant honour to hold space and support to these wonderful individuals. And it is a constant reminder for me to check my privilege and really assess the impact I am having or could have on our community.

Now, instead of bingeing Netflix or watching TV each evening before bed, I am glued to her TikTok live, which connects folks from around the world who are engaged in robust conversations about First Nations, Indigenous, Metis, and Inuit issues impacting people today.

When you received your leukemia diagnosis, you came to the Okanagan. What drew you here to the valley?

It was the intersection of the mountains and the water. We had come here to visit my husband’s family a year before we made the decision to actually leave Toronto. And it was the stunning natural beauty that inspired us to move here. When I am walking our dog on one of the many paths overlooking the lake, I feel a strong connection to Mother Earth and a balance in my life that I just didn’t get living in a large city.

I enjoyed your TEDx talk defence of millennials and gen Z from a few years ago. I happen to agree that we should move away from pejorative characterizations of these generations. They are next in charge, so what do we need to know about them—or all of us?

We all have lived experiences that shape our view of the world and of others. It’s important to understand these factors so we can better understand each other. Rather than judge or make assumptions about people or communities, it is more helpful to listen and ask questions. This leads to deeper connections that not only honour our differences but also our shared humanity, which can make our collaborations more effective, powerful and meaningful.

Your Storytelling hosting role with BWB is a natural fit. Can you share any crossover insights that align with your work at Studio—or any hosting role you’ve had, for that matter?

Remember to always make folks feel comfortable and warmly welcomed, and that they belong. That is key. Getting up in front of a group of people and speaking is never easy, especially when talking about something so personal, as many speakers at BWB’s Storytelling do. So the bottom line: creating a sense of belonging for everyone who shows up is job number one.

Tell us a story that reveals something important and meaningful about you.

I almost never made it to my first TEDx talk, in South Carolina. The night before, there was a huge snowstorm on the East Coast, and two of my connecting flights were cancelled. I was on the phone for over four hours with the airline but couldn’t get any confirmations because hundreds of flights were being cancelled or changed.

The next morning we had about 15 centimetres of snow here in Kelowna, and although the drive to the airport was a lot longer than usual, I still made my first flight with no issues. However, the flight only got me to Vancouver, and I was literally going in the wrong direction, with no flights scheduled for down east yet. By the time I got to Vancouver, the good folks from TED had found me some new flights that would get me to South Carolina in time. Then, just minutes after we got the new flights booked, an announcement reported that there was an issue with the plane and they had to remove all the fuel. We were delayed three hours. During this time, I was starting to panic that these were all signs that I was not meant to give a TED talk. Then I took a deep breath and told myself no more negative talk and let’s be positive—pragmatically positive!

I had an idea. I started to connect with the other passengers at the gate who were also annoyed about the delay. Then I began talking to the flight attendants and the pilots, sharing with them where I was going and why. It turned out the pilot had attended Furman University—the very place where I was going to deliver the talk. Then something else remarkable happened: He asked me to give my talk right there. The pilot announced that one of the passengers was giving a TED talk and asked me to come to the microphone. The next thing I know I’m giving a warm-up of my talk to all the other travellers. What an exciting experience. Needless to say, I did eventually get to Greenville, South Carolina, after a few crazy missed connections in Chicago and NYC, and with 30 minutes to spare I was able to hit the stage for the dress rehearsal.

Bottom line: When you enjoy life and commit to staying positive, you can take a negative experience, turn it around and make it your own in a new way.

TED Circles is returning to the Staples Studio (tonight) March 30 at 6 o’clock.

Matt Stewart is the community manager at Staples Studio Kelowna.

This column was submitted as part of BWB Wednesdays.