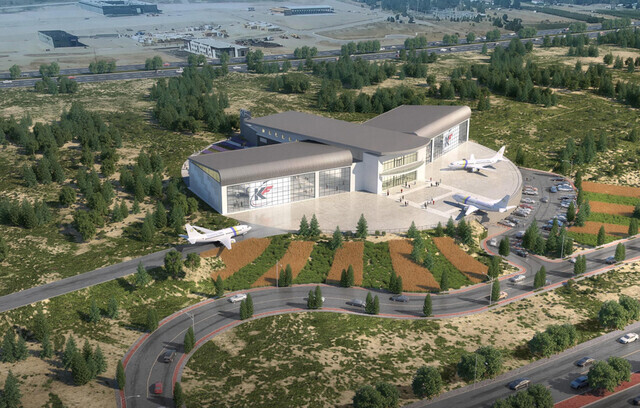 A new aerospace museum and conference centre being built by KF Aerospace at the Kelowna airport is being partially funded by the federal government.

The national Ministry of Natural Resources announced this week it is investing $800,000 in the KF Aerospace Centre for Excellence because it will use mass timber construction methods.

The two-storey, multi-use structure will be the first of its kind in Canada, using state-of-the-art floor and tall wall wood-based systems to accommodate the large spacing between columns—a typical design element for a hangar but not yet done using this innovative building system.

Once built, the total carbon benefits realized from the use of mass timber for this construction are an estimated 1,753 metric tonnes of carbon dioxide.

“Wood is being used more and more in building bigger and taller buildings, and we’re leading the world at it. Creating new markets for Canadian timber supports our forestry workers, creates jobs and gets us to net zero,” said Canada’s Minister of Natural Resources Seamus O’Regan Jr..

Ground was broken on the ambitious project two weeks ago. It is expected to open sometime next year and operate as a non-profit via legacy endowment by KF Aerospace founder Barry Lapointe.