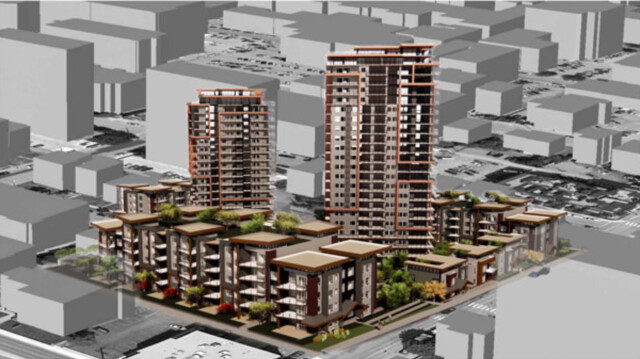 The project, dubbed City Gardens, would cover an area between Fourth and Fifth avenues and from Battle Street past Nicola Street. Designs on the project’s website show part of Nicola Street could actually be blocked off.

Two proposed towers in the project would become the tallest buildings in the city, with one set to hit 22 storeys and the other 18. Three apartment buildings are also planned, at four or five storeys each. Six townhomes would round out the project. Kelson Group estimates it would be adding 435 units of housing once the project is fully built out, including rental apartments and condominiums.

Along with the multiple new structures, a garden area would be included between the buildings with an amphitheatre, outdoor kitchen and dog area.

“Our team has been working for a while on this project,” Kelson president Jason Fawcett said in a press release. “We recently met with the city’s development services department to share our plans to ensure they align with the city’s goals of livability and walkability, not only for potential new residents, but for those who work, visit, or live in our downtown area. The plans aren’t fully confirmed as we are seeking our community’s feedback to help us make this a signature development in Kamloops’ downtown core.”

The project still needs approval from the municipality and would require the city to agree to selling a section of Nicola Street and a laneway. City infrastructure would also need to be moved.