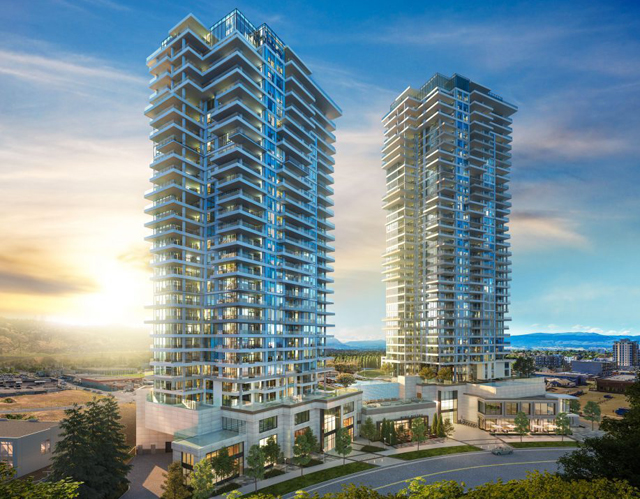 The first tower at Kelowna’s ONE Water Street development has reached 36 storeys into the sky, officially making it the tallest building between Metro Vancouver and Calgary.

And the view from the top is simply stunning.

“You’ve got panoramic views in all four directions,” North American Development Group managing partner Henry Bereznicki says. “You can probably see 20 miles north up the lake. You can see 10 miles south down the lake. You’re looking right over the bridge. It’s by far the best view I’ve ever seen in Kelowna.”

The tower is scheduled to open in late spring while the second building continues its climb next door. When all is said and done, 427 homeowners will move into the two structures that will change Kelowna’s skyline forever.

“We’ve changed the skyline, but there will be a major community tied to that building,” Bereznicki says. “You’ve got 60,000 square feet of outdoor amenity space that’s private to the residents—the pickleball courts, two swimming pools, hot tub, half a dozen outdoor barbecues, half a dozen outdoor fire pits, grass, landscaping. It’s going to be like an all-inclusive resort in Cancun.”

The amenity space will be known as The Bench, a unique piece of land that will be located between the two towers. It will be situated four storeys above street level, and it will have anything and everything you could possibly want when it comes to enjoying Okanagan urban living.

There will be three pools—a swimming pool, a lap pool and a hot tub—three barbecue areas for large family gatherings complete with natural gas hookups and tables on which to enjoy your meal, several fire pit enclaves and a court for pickleball, which is becoming a popular sport across North America and especially in Kelowna. There will also be a dog park, business centre, guest suites for out-of-town visitors, two gyms and a poolside entertainment room.

“It’s like a subdivision with all these luxury amenity items involved,” Bereznicki says.

Bereznicki is also proud of the way the project has continued through the COVID-19 pandemic. Supply chains were interrupted during the spring, but safety was never compromised and work has been able to continue. Sales have been outstanding as well; the project is already 90% sold out.

“We are so thankful and complimentary to all of our sub-contractors who have worked there,” Bereznicki says. “There have been some people pouring concrete and tying rebar there for two full years now. We have a very loyal, hard-working crew of sub-contractors on the project, and they’ve done a great job.

“It’s been a very successful project, from design, construction, sales, marketing and financing, You have to be firing on all of those cylinders for something of this scope to work.”

The first tower is complete—suites are fully painted, the appliances are in and the front doors are locked—up to the 15th floor, while the windows have been installed nearly to the top.