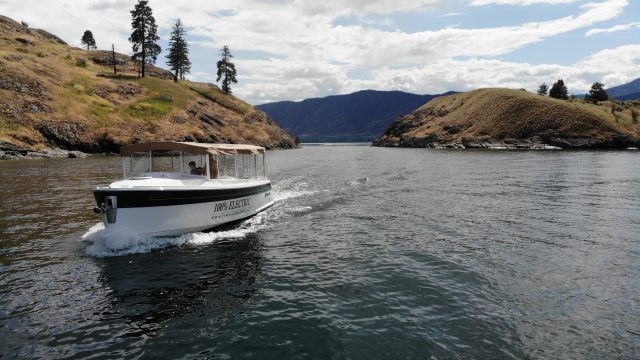 A Kelowna manufacturer has secured its first commercial client as demand grows for electric boats.

The B.C. capital will have a new, environmentally friendly tourist attraction when the Victoria Electric Boat Company hits the water in 2020. The new company is a division of Gray Line Hop-On-Hop-Off tours and will offer patrons cruises of the Inner Harbour and Gorge Waterway.

With announcement of the deal, buzz has been growing locally and internationally, and it looks like Seattle may be next in line for a fleet of Templar’s electric boats.

“A team from Seattle came up and jumped on the same idea as the Victoria guys,” says Bieber. “They think it’s a perfect extension of their services as well. With so many waterways connected in the area, it’s logical for them to make the next step from hop-on-hop-off buses to waterway tours.”

The 29-foot boats can carry 12 passengers and include an electric flush toilet, sink, onboard central heat, and a fridge. The boats can travel up to 10 hours on a single charge and can reach a maximum speed of 6.5 knots.

“The Victoria guys will have the opportunity in the evenings to offer a wine tour, as they can get a wine licence, thanks to the facilities,” said Bieber. “This gives them a big advantage over a pontoon boat or smaller boats.”

Bieber says interest has been coming in from all over the world, including Botswana, Zambia, Spain, Germany, Switzerland, and Amsterdam.

The buzz is growing in the Okanagan as well, but the boats’ slow speed may be a hurdle.

“This idea is foreign to lake boaters. They have speedboats, surf boats, that’s all that’s ever happened on lakes,” added Bieber. “Speed! Power! Pulling, cruising, sports! But on the ocean it’s the exact opposite.”

Bieber says there’s interest in running a water taxi service in Kelowna, but there are drawbacks.

“With summer being so short in the Okanagan, trying to support any kind of tourist-based business is really difficult. But we are trying to assess whether someone will be interested in operating (the business) or whether we grab the bull by the horns and operate something as a test that we would run beyond just the summer months.”

“Whether we run a taxi service from the Delta Grand to the Downtown Marina, all the way around to the Eldorado, it’s something we’re entertaining. We have to see if there is interest to support something like that. Then we can look at Summerland and run from the Waterfront Resort to the Penticton Lakeside Resort,” said Bieber

Templar Marine uses a lithium battery-powered Torqeedo propulsion system, which has a running cost of about 10 cents an hour. The lithium cells are the same as in BMW’s i3 electric vehicles.

Bieber attributes Templar’s success to the surge in interest in electric cars.

“There’s no way we could be where we are today if it wasn’t for the push by Tesla,” he said.

Bieber says the water taxi service will depend on consumer demand and whether or not it is feasible year round.