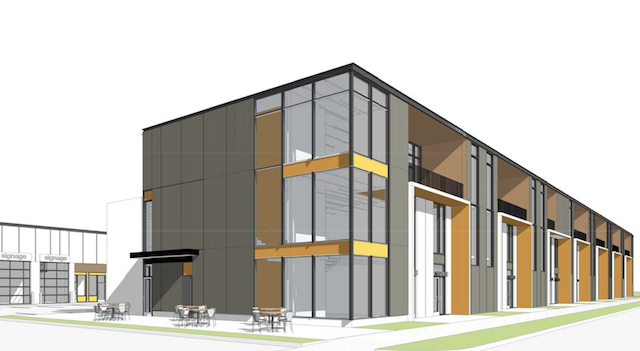 The public will have a chance later this month to weigh in on a proposed commercial development in Kelowna’s Packing District.

The company acquired the property two years ago and has been working through the rezoning process with an eye to an urban future in the current industrial area.

“PC Urban purchased the property with a commitment to the transition concept and a belief in the power of a mixed-use formula to create interesting and functional enclaves that serve the city’s objectives and the needs of a spectrum of users within the growing and changing neighbourhood,” says Shawn Oh, PC Urban’s assistant development manager, in a letter to the city.

Oh says the project will set a precedent and encourage similar uses in the area, adding the project is aligned with city objectives.

“Our proposed plan takes into consideration the strong support for creation of light-industrial spaces for businesses near the downtown core,” he says.

“We also believe that this mixed-use concept would create a unique enclave in Kelowna, an interesting and attractive neighbourhood amenity for residents and also a vibrant ‘edge’ between the urban core and the traditional industrial lands behind and beyond.”

Its neighbours include BC Tree Fruits, Sun Ripe and Sandhill Wines.