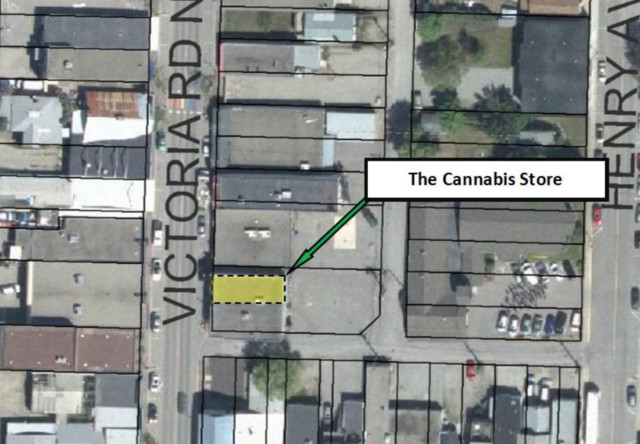 Disregarding the opposition of the school board and a group of downtown business owners, Summerland council voted unanimously Tuesday to approve a cannabis storefront on Victoria Road North.

“It’s the equivalent to alcohol in our world today,” said Coun. Richard Barkwill, adding he expects the store will have “zero impact” on the high school 200 metres away.

“I don’t think that the students in Summerland are going to be hanging around outside the cannabis store looking for someone to bootleg them some hash,” he said, pointing to taxes that have elevated the price of legal cannabis above the existing black market youth already use.

Okanagan Skaha school trustee Dave Stathers had addressed council to reiterate SD 67’s opposition to the shop, which was due to its proximity and 11 p.m. close.

It was, however, pointed out that the Peacock’s Perch cold beer and wine store already operates the same distance from the high school under the same hours.

Roch Fortin presented a petition containing 40 signatures that asked cannabis shops be kept out of the downtown. “I became involved by de facto because many people were afraid to speak out and business owners’ fear of retaliation.”

Two business owners that were previously opposed, including Dionne Bakalos of Summerland Gold Exchange and the Green Gaia cannabis stores already approved in Summerland and Penticton, wrote to council to formally retract their opposition to the Victoria Road Store.

The storefront’s co-owner, Sergio Pawar, told council they have purchased their entire building at a cost of $750,000 and plan $250,000 more in renovations.

“I want you to know that we are here and trying to come here with open arms … we want to work with everybody,” he said after highlighting Fortin is apparently involved in a forthcoming brewery in downtown Summerland. “I can’t wait for your brewery. I think it’s going to be great for the neighbourhood.”

“I think we should welcome people from out of our community into this town to invest and help our community grow,” Coun. Erin Carlson said.

Mayor Toni Boot was on the same page.

“To turn away a retail establishment, regardless of what it is, that fits into our downtown and follows our policies seems like a hypocritical thing to do.”

The vote to provide municipal approval to the proposed store passed unanimously. The provincial government still needs to provide the final green light for opening, which should take months.