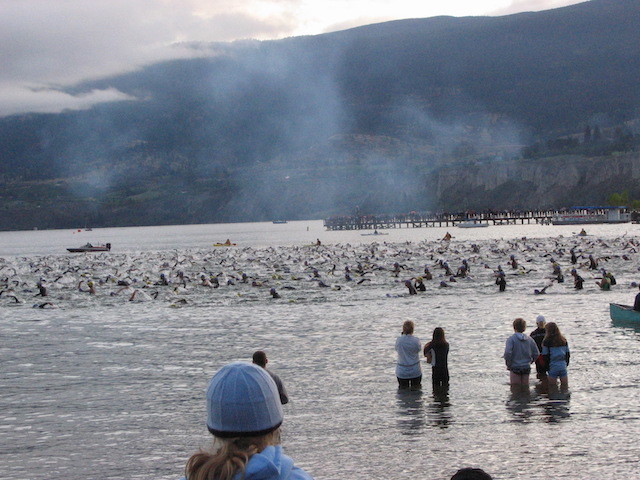 Ironman is coming home to Penticton.

City council voted unanimously Tuesday to have city staff move forward with negotiating a five-year agreement with Ironman Canada to bring the iconic race back to the city.

“Ironman coming back to Penticton is like a divorced couple getting back together again,” Coun. Julius Bloomfield said, explaining he’s “delighted” by the idea.

While a contract needs to be finalized, councillors heard the preliminary proposal will see Penticton host the full-length edition of the race for five years starting in 2020 at an annual cost to taxpayers of $299,000 in cash and $111,000 in-kind support.

Mayor John Vassilaki was on council with Judy Sentes in 2012 when Penticton dumped Ironman during a disagreement over finances.

“At that time it was the right thing to do in the circumstances,” he said. “But you know, times change and we have to change with the times.”

“We need to bring this event back to the community,” Vassilaki said, calling the required outlay required of taxpayers “smart money.”

Since Ironman left, MB Events has organized a triathlon in Penticton first under the Challenge banner and now Super League. Both races did not attract numbers anywhere near what Ironman did, although the ITU World Championships in 2017 drew more than 3,500 athletes.

Earlier Tuesday council heard a presentation from Ironman representative Dave Christen, who highlighted $8.8 million in visitor spending recorded during the 2017 Ironman in Whistler.

He shared figures that showed the average athlete comes from a household income of $247,000, is 40 years old and is 92 per cent university educated.

“This is where Ironman Canada was born,” Christen said. “The energy that we built here is something that we try to emulate everywhere else.”

The required $663,000 host city contribution is being softened considerably by the business community, with local hotels, Tourism Penticton and others pitching in $200,000. It’s hoped additional sponsors can be found.

The proposal expects 2,600 athletes in the first year, which would translate to upwards of 10,000 visitors to Penticton during Ironman weekend.

A large crowd packed into council chambers broke into applause and cheers when the unanimous vote passed.