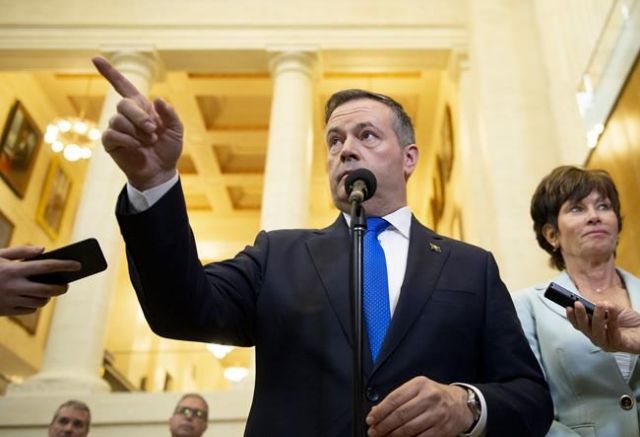 VICTORIA — Get ready for higher gasoline prices and shortages in B.C. and a supply surplus on the Prairies if Alberta Premier Jason Kenney uses a newly proclaimed law to restrict fuel exports to its western neighbour, say industry experts and court documents.

“The one wild card factor that we really can’t predict is the political factor: would, in fact, the Alberta government actually put in effect, in practice, the curtailment of gasoline and diesel shipments from Alberta to the West Coast,” Michael Ervin, Kent Group Ltd., senior vice-president, said Thursday.

The Preserving Canada’s Economic Prosperity Act, the so-called turn-off-the taps law, was passed by the former Alberta government a year ago. Kenney’s United Conservatives proclaimed it as law this week and the threat to put the squeeze on B.C. is real, said Ervin, a petroleum market expert.

“The possibility of that certainly changed, increased since Premier Kenney has been elected into office,” he said in a telephone interview from Sidney, B.C.

Ervin said he expected gasoline prices in B.C. to jump by at least 10 cents per litre if Alberta started restricting fuel supplies. He said oil companies in Alberta may also feel the pinch because their B.C. customers will be cut off, creating a surplus there.

The B.C. government immediately moved to have Alberta’s law declared unconstitutional with a legal challenge, claiming “the central purpose and legal effect of the act is to authorize and provide for discrimination against British Columbia in relation to exports of natural gas, crude oil and refined fuels.”

An initial hearing is set for May 7 in Calgary.

An affidavit filed alongside the statement of claim outlines B.C.’s dependence on Alberta fuel products and the potential impacts of cutbacks.

“The threat of refined fuel supply shortages can have rapid price impacts,” Michael Rensing, a B.C. government energy expert, says in the document.

He pointed to an anti-pipeline protest in July 2018, where demonstrators hung on lines from a bridge above Burrard Inlet in Vancouver. He said those actions had the potential to cause fuel shortages on Vancouver Island.

“They advised me that if the supply of gasoline to Vancouver Island was interrupted for even 48 hours, that could affect the ability of retail gas stations there to remain open,” the affidavit says. “If the volume of refined fuels supplied to B.C. consumers through the Trans Mountain pipeline is significantly reduced, shortages of those products will likely occur.”

Rensing’s affidavit says an explosion at an Enbridge natural gas pipeline near Prince George last October saw prices increase by 10 cents within 48 hours. The explosion did not disrupt natural gas supplies to the refinery near Vancouver but the possibility of shortages sent prices upwards, it says.

Alberta supplies, directly or indirectly, more than 80 per cent of the gasoline and diesel used in B.C., says the affidavit.

“That impacts business,” he said. “It impacts families. It impacts the government. It creates a real crisis.”

He urged Kenny and B.C. Premier John Horgan to step back from the dispute and see the strong bonds between their provinces.

“We’re the two most integrated economies in the country, on labour, on trade, on the movement of goods, on investment, and there are huge opportunities of things we could be doing to grow our economies, but the Trans Mountain expansion and this energy conflict is in the way of it,” said D’Avignon.

The premiers need to find a solution, he said.

“People forget that families, friends and companies move back and forth between Alberta and B.C. every day,” D’Avignon said. “When B.C. gets a cold, Alberta gets sick and vice versa.”

Kenny was in Ottawa Thursday testifying before the Senate’s energy committee about the bill overhauling environmental assessments. He told the committee that Bill C-69 violates Alberta’s constitutional right to regulate its natural resources.