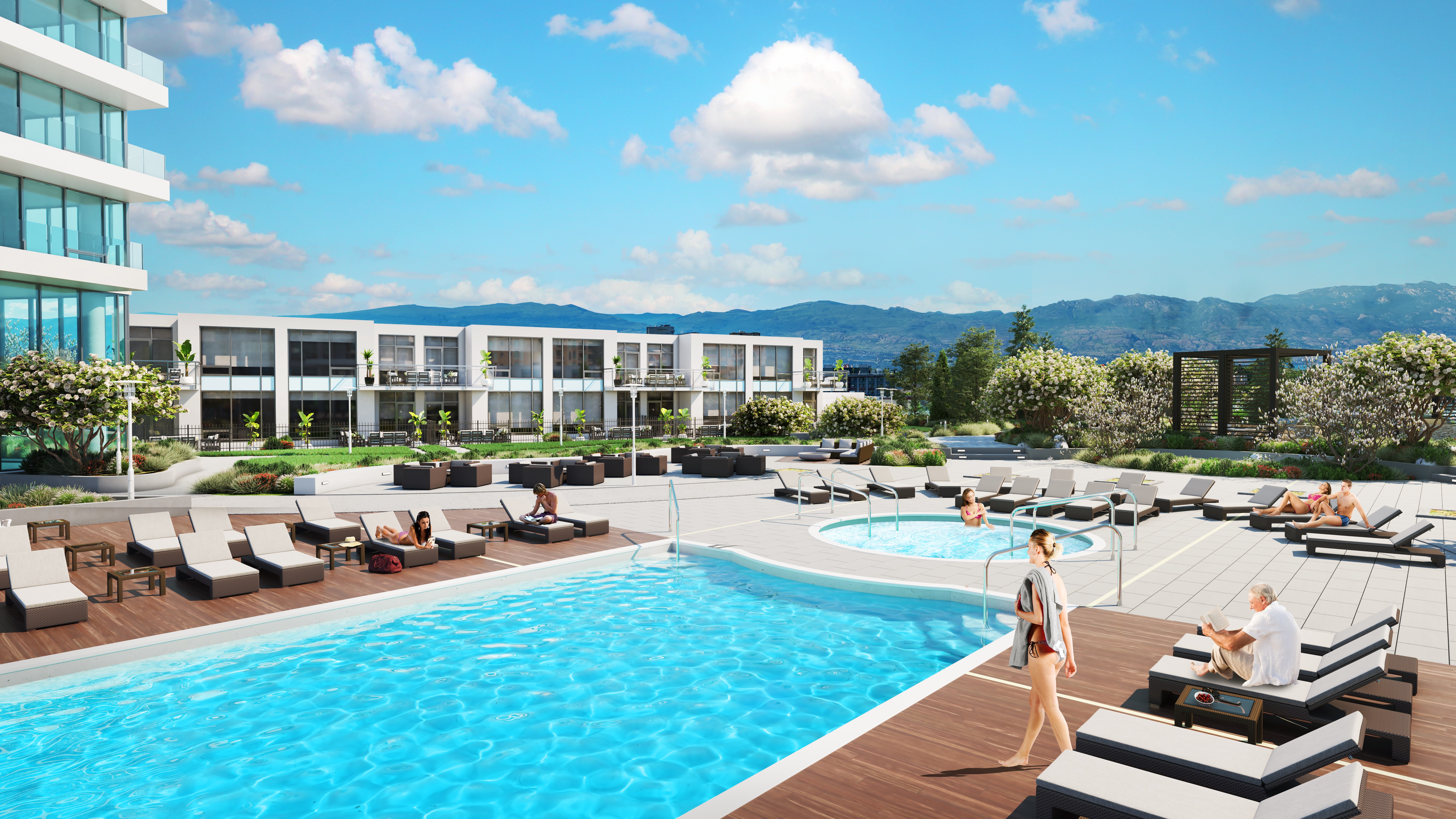 There aren’t many developments where you can take the elevator down from your home on the 33rd floor, walk outside and enjoy nearly an acre and a half of green and recreational space.

In fact, there are none in B.C. or Alberta, but that will change once ONE Water Street rises from the ground in downtown Kelowna.

“There’s nothing like it in any development in Kelowna,” North American Development Group vice-president Russ Watson says. “And we don’t know of another project in Vancouver or Calgary that offers that sort of amenity package for the residents.”

Watson is talking about The Bench, a unique piece of land that will be located between ONE Water’s east and west towers once they are completed in early 2021. It will be located four storeys above the street, and it will have anything and everything you could possibly want when it comes to enjoying Okanagan urban living.

There will be three pools: a swimming pool, a lap pool and a hot tub. There will be three barbecue areas for large family gatherings, complete with natural gas hookups and tables on which to enjoy your meal. There will be several fire pit enclaves. And there will be a court for pickleball, which is becoming a popular sport across North America and especially in Kelowna.

“It seems to be the sport du jour that’s extremely popular in the U.S. now and is starting to become popular in Canada,” Watson says. “Kelowna seems to be a centre for pickleball. They had the Canadian pickleball championships last year, and 400 people showed up.”

There was still plenty of room left over on The Bench, so the developers decided to include a dog park since pets will be allowed to live in the towers. There will also be a business centre and guest suites for out-of-town visitors.

Inside the towers but on the same level as The Bench will be two gyms, complete with state-of-the-art cardio machines and weights in one, and a studio for yoga, Pilates and stretch in the other. The studio is also an extension of the poolside entertainment room, which will be the perfect space to host bigger celebrations.

“We were wanting to separate ourselves from the other developments that were being planned,” Watson says. “We had the luxury of an acre and a half of roof on top of the three-storey parking structure, so it was just a natural progression to create the amenity.”

Homes in ONE Water Street, which is Kelowna’s No. 1 selling development, were so popular that both towers will now be constructed at the same time.

“Initially we were going to build one, and then if sales went well we’d build the second one maybe a year later,” Watson says. “Well, we’ve got enough sales that we are building both towers simultaneously. We’ve just put the second crane on the site, so it will be the first project in Kelowna’s history to have two cranes operating at the same time.”

ONE Water Street’s East Tower is still on track to open in early 2021, which means residents will be able to move in, go downstairs and enjoy The Bench that summer and beyond.