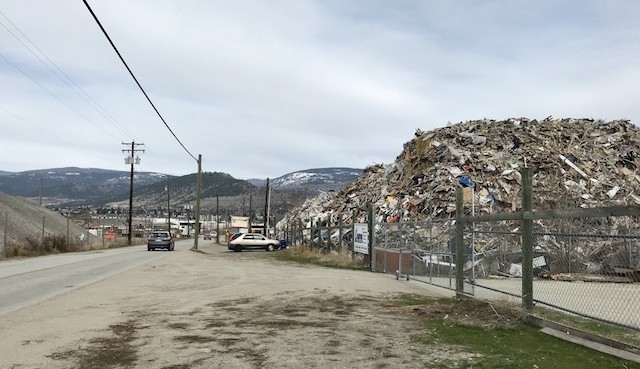 The company responsible for a mountain of waste on Penticton Indian Indian Band locatee land has gone bankrupt, leaving behind questions about who will clean up the mess.

Appleton Waste Services filed for bankruptcy earlier this month in Vernon, according to online records.

The company has used the site on Green Mountain Road near the entrance to the PIB reserve to sort waste for several years. The waste pile’s growth pushed the issue into the news in April 2018 after complaints from neighbours. At the time, the company assured it had purchased new equipment to deal with the backlog of trash.

But with bankruptcy proceedings now started, it’s not clear who will be on the hook for the cleanup.

Locatee land owner Adam Eneas declined to comment on the situation when contacted by Castanet but said in the PIB community Facebook group that he is exploring options on how to remove the trash pile.

Company owners David and Rock Appleton did not respond to request for comment. An Appleton employee that picked up the company’s general line told Castanet “bankruptcy is a strong word” and they were “restructuring.”

David Appleton has had multiple fights with area governments in recent years. The company was sued by the Regional District of Okanagan Similkameen last year for $150,000 in unpaid tipping fees. He also publicly called out the City of Penticton after losing the bidding process for residential waste pickup, despite Appleton’s lower bid.