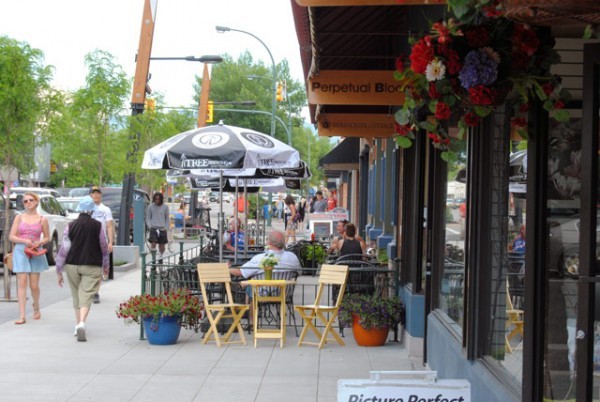 The City of Kelowna is expanding its sidewalk patio program to South Pandosy and Rutland.

Sidewalk patios were introduced to Bernard Avenue following the revitalization of the downtown street and widening of sidewalks in 2014.

Businesses wishing to take part would be required to pay either a square-footage or yearly fee depending on the size of the patio.

“Fees associated with using public lands are a requirement,” Olson said. “They must be established at fair market value.”

In South Pandosy, fees would range from $510 per year for a small patio to $8 per square foot for a large patio with liquor. Those are the same as Bernard Avenue, with large patio fees actually dropping slightly.

In Rutland, fees would run from $225 a year for a small patio to $4 per square foot for a large patio with alcohol.

While the two associations in Rutland and South Pandosy were both excited for the new opportunities for growth and additional revenue streams, Olson said the Downtown Kelowna Association had some concerns about the changing land values for downtown businesses operating patios off Bernard Avenue.

“It was understood that it was based on an appraisal,” Olson said. “It was accepted as those are the values, however, they still had questions about the activities that have gone on in the downtown. To me, those things aren’t necessarily related because they are already captured in the land value.”

She says they see it as a long-term benefit as some streets perpendicular to Highway 33 develop and become the town centre.

She does see an almost immediate uptick in the SOPA and South Pandosy area.