Industrial and commercial strata opportunities are extremely rare in Kelowna, especially in a central retail location, but they are an increasingly popular choice for businesses that understand the value of building equity in their own company. With continued low interest rates, increasing land prices and very little opportunity to purchase land in central Kelowna, now is a good time to think about buying industrial strata for your business.

The entire building will cover 66,000 square feet, with the new IntraUrban units ranging from 2,000 to 3,900 square feet and offering quality flex space for general industrial use with office and retail components. The development will feature bay garage doors, built-in upper mezzanines, generous glazing for natural light and a modern, high-end product that is rarely found in other industrial projects in Kelowna. 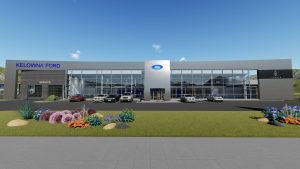 “Rents in the Kelowna market are on the rise, and in the long-term, owning is a prudent and more profitable idea,” says PC Urban principal Brent Sawchyn. “For Kelowna companies, owning means they can have more capital to invest in tools and growing the business, rather than throwing the money away at rent. Believe it or not, it tends to cost 25% more to rent rather than to own.”

“The attractiveness of commercial condos is that, with a low-interest environment, small business owners see real value in ownership,” says Steve Laursen, a broker with Royal LePage in Kelowna who is co-marketing the project with CBRE. “These businesses are able to grow equity through their real estate. They’re able to improve space and reinvest in it knowing that they’ll benefit once the time comes to sell the property. There are tax breaks for them if they own their own property. They’re able to control their costs and expand or contract their business instead of being at the whim of a landlord. They control their own destiny.”

In 2016, PC Urban launched a commercial strata development in the heart of Vancouver called IntraUrban Laurel. It was the first commercial strata within city limits in more than five years and it was a huge success, selling out before construction started—an unprecedented feat in the Vancouver market, one that highlighted the need for ownership opportunities for the city’s small and medium-sized businesses. PC Urban had a similar experience selling its second industrial strata project on Mitchell Island, called IntraUrban Rivershore and its third, IntraUrban Brentwood, in Burnaby. The company is now bringing their experience with industrial strata to Kelowna’s burgeoning commercial real estate market.

“There is a rapidly closing window of opportunity for businesses to invest in their own commercial property in central Kelowna,” Laursen says. “IntraUrban Enterprise will be a premier industrial development due to its location, featuring unparalleled access to retail, downtown and main transportation routes for business space as well as for recreational storage.”

Named by Western Investor magazine as the number one city to invest in real estate in Western Canada over the next year, Kelowna’s land values are set to rise again in the coming years. For more information on industrial strata in the heart of Kelowna, check out www.intraurban.ca/enterprise.