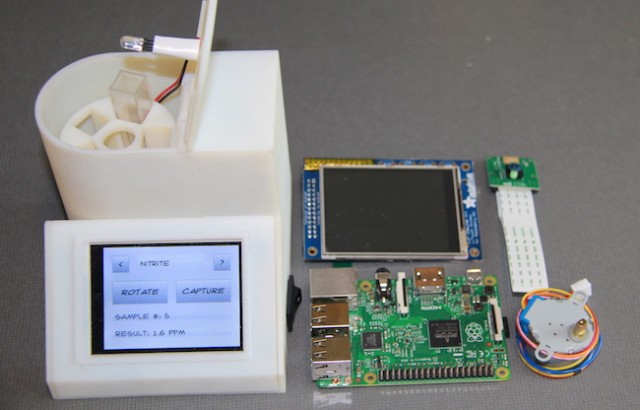 Built using a 3D printer, the device can check for water quality, acidity and nitrite concentration for in-field diagnostics and is particularly useful in remote locations and in Third World countries where water-borne illnesses are common.

“Nitrite is widely used as a preservative and additive in food production, (in) bleaches and dyes in industry, and fertilizer in agriculture. However, it is classified as a health hazard because high nitrite concentration in water can cause many diseases, such as methemoglobinemia, miscarriages and central nervous system defects at birth,’’ says research engineer George Luka.

The low-cost, battery-powered device can be wirelessly connected and equipped with a single-board computer (Raspberry Pi) for data processing, storage and exchange.

An eight-megapixel digital camera is used to image and record the change in what’s known as a colorimetric assay.

‘’Using a standalone device rather than a smartphone also reduces the potential setbacks caused by new models of phones in the future and any incompatibilities that may arise,’’ says Luka.

It also improves repeatability, sensitivity and reliability of the tests.

The device and the algorithm developed in Luka’s work are not limited to water analysis and can be used for urinalysis and other colorimetric assays for environmental and medical applications.