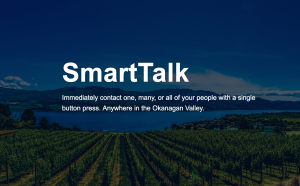 If you have a mobile workforce, Omega Communications Ltd. has a new system that will lead to better efficiency while also keeping your employees safe.

It is also a legal way to communicate while operating a vehicle.

SmartTalk is a private, digital, two-way radio network for the Okanagan Valley, which allows for two or more people to communicate with the simple push of a button.

“The intent is for anyone with a mobile workforce,” Omega president and GM Warren Saari says. “If you’re dispatching your people or communicating with your people—it could be any of the construction and or trades companies such as plumbing/hvac, security companies, pool and landscape companies, delivery companies … the list is endless—and you’re using cellular technology, you’re putting your business at a risk.

“Two-way radio is much safer, first of all, and it’s legal.”

The SmartTalk system is also the area’s most expansive. As of last week, one employee in Armstrong can push a button and speak immediately with someone in Okaganan Falls—or anywhere in between. Omega is already in the works to make the coverage area even bigger, from the U.S.-B.C. border to Salmon Arm. Kamloops and Merritt are also targeted to be in the network before years end.

Other companies offer two-way radio service, but customers are restricted to one tower. Not with Omega, whose radios can be mounted in a vehicle or on an employee’s belt.

“There’s ability for it now to work very similarly to a cell phone fashion as far as roaming from tower to tower,” Saari says.

The radios have private and public capabilities, meaning you can have a one-on-one conversation with someone on your network or send out a message to everyone.

“You get tremendous amounts of efficiency using your all-inclusive company channel than from one-to-one conversations,” Saari says. “Everyone stays in the loop. Instructing one employee to pick something up when another may be a block away gets missed when using cellular.

“And it’s fast, too. No looking up numbers and dialling. You just push and talk. But if you have a sensitive topic requiring one-to-one privacy the system can accommodate that, too.”

There are other possibilities when it comes to using SmartTalk, too. Saari envisions a network where construction and subtrade workers can put out a call for equipment or trade workers needed in a pinch. Or perhaps even a social group, where a Friday afternoon get-together can be arranged over the network.