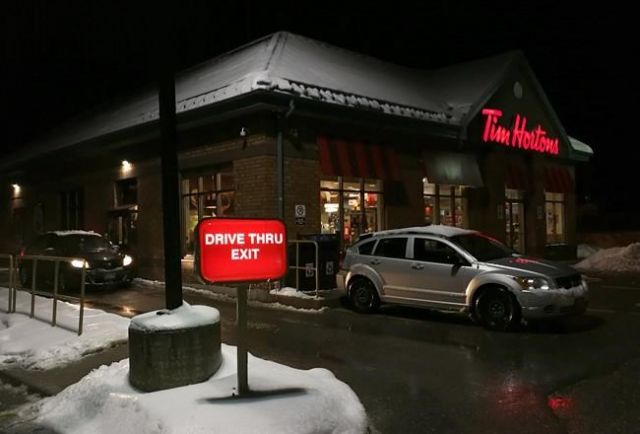 Image: The Canadian Press
A customer stops their car at a Tim Hortons restaurant drive-thru window in Newcastle, Ontario on Sunday Feb. 11, 2018.

The sales slowdown comes as about half of the company’s Canadian Tim Hortons franchisees joined an unsanctioned organization to fight against what they say is their corporate parent’s mismanagement of the coffee-and-doughnut chain.

The chain last registered comparable sales above 0.3 per cent during the third quarter of its 2016 financial year when the metric reached two per cent.

“We have seen some sequential improvement in the comparable sales of Tims in Canada,” said CEO Daniel Schwartz in a conference call with analysts, pointing to the company’s 0.8 per cent growth in the country during the most recent quarter.

He said a decline in part of Western Canada and softness in lunch time purchases led to the relatively flat results, but he hopes to build on the recent quarterly momentum by continuing to grow its recently launched espresso-based beverages offering, driving lunch sales with new products like its grilled cheese sandwich, and focusing on its new pay-and-go app.

In its effort to double down on digital innovation the company announced the appointment of Josh Kobza, former chief financial officer, to the new role of chief technology and development officer. Matthew Dunnigan, who has been the company’s treasurer since 2014, is taking over the CFO role.

The lacklustre sales are part of the background to an ongoing dispute between the company, known for drastic cost-cutting measures at the chains it acquires, and the Great White North Franchisee Association, which formed in March 2017 to give voice to frustrated restaurant owners.

Most recently, the group accused RBI of failing to help Ontario franchisees offset a roughly 20 per cent increase to the minimum wage with a 10 per cent price hike on all menu items.