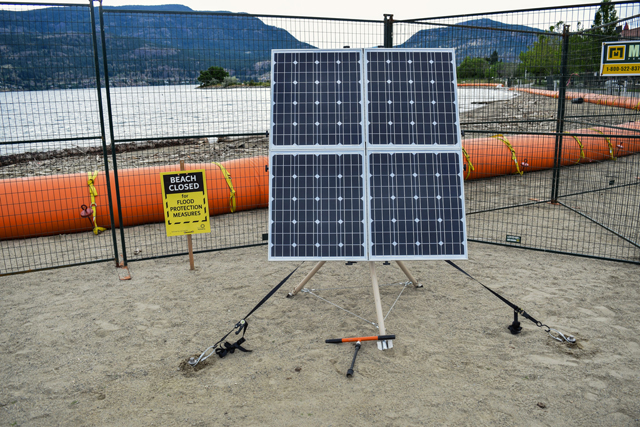 Disaster relief efforts in the Caribbean are getting one more solar boost from a Kelowna company as emergency aid winds down.

Azimuth Solar Products was to ship one of its on-the-ground emergency portable solar generators to GlobalMedic on Thursday thanks to support from an online fundraiser.

“One thing that I have learned is that you can never be too prepared for disasters,” said Azimuth CEO Shari McDowell.

“They happen quickly and often with little notice. One fire, flood or power outage is all it takes for services to start breaking down. Having emergency backup power is a critical part of disaster planning.”

The campaign was launched on Generosity.com on Sept. 18 in response to the damage done by hurricane Irma in the Caribbean.

Within a week, the situation developed as hurricane Maria made landfall on Puerto Rico and devastated the island’s electricity grid, prompting solar donations from around the world.

The campaign raised $1,295 US in a month, and Azimuth is matching that donation to cover the costs of their system.

During the campaign, they connected with Toronto-based GlobalMedic, a non-profit organization which deploys rapid short-term responses that provide medical relief and intervention in the wake of disasters and crisis.

Their quick and dedicated responses to save lives have been recognized worldwide.

The equipment is being shipped to GlobalMedic’s headquarters in Toronto.

From there they will load the donations with the rest of their supplies for their last trip to the Caribbean in the first week of January, and deploy the solar equipment to response teams in the field.

Among the donations is a functional prototype of Azimuth’s high-powered portable solar generator system.

The system includes four panels mounted on a durable, custom-built tripod for a total of 360 watts power.

This system can tilt and rotate 360 degrees to follow the sun and is easily assembled and disassembled without tools, making it ideal for traveling into remote locations, over difficult terrain, or where infrastructure is damaged.

“By being able to track the sun’s movement, you can produce up to 40 per cent more power compared to stationary systems,” said Azimuth chief technical officer, Matthew Longman. The ASP360 can produce as much power as 500W of stationary panels.”

This system is similar to systems used by NATO or the U.S. Armed Forces, but at less than half the cost, and is powerful enough to run crucial medical and communication equipment in GlobalMedic’s response centres.

The solar generator will come equipped with power management components including a combination charge controller and pure sine inverter.

Longman and McDowell have been developing this system over the last few years and are excited to see how it will fare in the field.

They both have experience in disaster response with wildfires and natural disasters in B.C., and they designed their portable system with emergency response in mind.

Azimuth has secured a retail and assembly location in Kelowna and are in the process of setting up production. The founders, Matthew Longman and Shari McDowell, have spent the last few years developing well-designed, robust mobile solar generator systems to give you high-output mobile solar power for all levels of users.

Azimuth Solar Products is expected to make more donations with GlobalMedic in the future as part of the company’s commitment to being a socially responsible business.

You can support Azimuth Solar Product’s initiative with GlobalMedic by donating at their ongoing Generosity.com campaign page.

At this time they are looking for a few more donations so batteries can be added, and to offset the cost of shipping to Toronto.