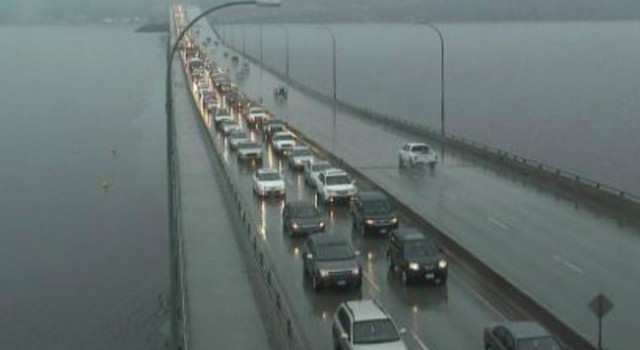 On average, Kelowna residents are far less likely to take the bus to work than the rest of the country, but the time it takes them to get to work is also significantly shorter.

New data from Statistics Canada illuminates how Canadians get to their jobs, and shows Kelowna is both ahead and behind the curve compared to the rest of the country.

Across Canada, the number of people who commute to work has gone up by more than 30 per cent over the last decade, and the vast majority of us still take a personal vehicle to work.

Statistics Canada says 79.5 per cent of all people get to work in a car, truck or van. Of those, only 5.5 per cent are riding as passengers.

Despite our love for our cars, StatsCan says the number of people taking public transit is going up.

In total, 12.4 per cent of all Canadians take public transit to work.

Kelowna commuters, however, are much less fond of the bus than the rest of the country. According to Statistics Canada, only 3.9 per cent of people here use public transit to get to work.

Kelowna residents are also much more likely to take their cars than the rest of the country. Here, 86.1 per cent of all commuters take a personal vehicle to work. Only about five per cent of them ride as passengers.

A relatively small proportion of Kelowna residents also commute by active transportation, like bicycles. The 7.2 per cent of active transport commuters here is more than the national average, which sits at 6.9 per cent.

With more of the country’s workforce now living in urban areas, StatsCan says “commuting is part of daily life” for most Canadians.

Last year, 73.5 per cent–or 11.7 million–of the country’s workforce lived in urban areas, and average commute times are going up accordingly.

Across the country, people spent an average of of 26.2 minutes travelling to their workplace last year. That’s almost a minute longer than it was five years ago.

In Kelowna, however, commute times are significantly lower. Here, commuters spent an average of 19.8 minutes commuting to work.

StatsCan says that, on average, bus commutes take much longer than commutes in personal vehicles. So Kelowna’s shorter commute times likely have a lot to do with the fact that very few people take the bus in the city.