When Kelowna Escape Games first set up shop in Kelowna a few months ago, it was the first company to bring commercial virtual reality to the city.

But for store manager William Yau, that was just a warm-up.

You are probably familiar with escape rooms: they’re themed rooms full of puzzles that you and a group of friends need to solve in order to escape.

Yau, whose main business is creating intricately crafted escape rooms, says it’s time to forget whatever you think you know about that experience, because Kelowna Escape Games is doing something totally unique.

When you think “escape room” you probably imagine being locked in a room trying to find a bunch of keys to open a bunch of padlocks.

But the mere concept of a padlock offends Yau.

“Padlocks are fine, but they are very limited when it comes to puzzle creation,” he says. Why would you mess around with a bunch of locks and keys, when you can build elaborate puzzles using sounds, lasers, and motion sensors?

Kelowna Escape Games is the next generation of escape room, and Yau says many of his puzzle components are hand-made, which creates the most authentic-feeling experience possible.

His The Rise of the Itzamna room, for example, plunges players into a pitch-black Mayan tomb. 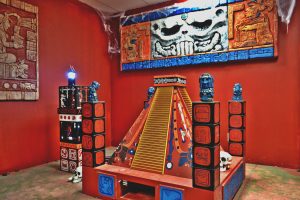 One portion of the stunning Rise of Itzamna room

As you and your friends cast the light of your lanterns down a narrow hallway, sand scraping beneath your feet, you’ll stumble across hand-carved idols and elaborate art on the walls.

Place a worn wooden statue in the exact right spot and a sharp crack echoes in the darkness, as a hidden door springs open. Cleverly redirect a beam of light, and a secret room rumbles into view.

The effects are all built right into the rooms, so there’s no interaction with the outside world required.

“All our puzzles are really hands-on, so you get to touch and feel everything, hold objects in your hands,” Yau says. “The way we’ve paired them with our technology also lets you interact in a much more interesting way.”

His technological innovations extend beyond the puzzles themselves, to the built-in hint systems that again mean no outside help is necessary.

An iPad screen built into the room allows players to choose hints for any puzzle they’re stuck on, and even choose between a variety of hints for each, spanning from easy to hard.

Yau says he’s also passionate about his customers getting the most out of their experience, which is why he lets groups take a full hour to try and solve them.

In the end, he says, his ultimate goal is for everyone to feel good about the experience. That’s why he’s designed the rooms to have a 20-80 per cent pass rate.

So while the rooms are challenging, Yau also genuinely wants most everyone to pass them. 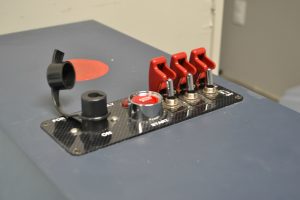 The Galaxy Defenders escape room has its own unique challenges

Right now, Kelowna Escape Games has rooms for both beginner groups, and those looking for a little more of a challenge.

He’s also in the process of putting together a Game of Thrones themed room, which he giddily explains will be complete with a full replica of the Iron Throne.

“I want my customers to be blown away by this,” he says, “They are going to be so wowed by the decoration in this room, they will already feel they’ve got their money’s worth before they start the puzzle.

For more information on Kelowna Escape Games, or to book your escape experience, check them out online.