Image: Contributed
Now completed, a Kelowna company’s wildlife overpass is the longest in the world.

A record-breaking feat of engineering has just been completed in British Columbia’s Yoho National Park, and the Kelowna company that built it says the project went up “without a hitch.”

The massive wildlife overpass spans multiple lanes of traffic across the Trans Canada Highway, and is now the longest animal overpass in the world.

Sean Holkestad is a project manager at Belvedere Place Contracting Ltd., the company that built the overpass, and he says the $6.5 million project will allow protected wildlife to safely make it from one side of the busy road to the other.

He explains the project was groundbreaking not just for its size, but also because of its decidedly ambitious design. 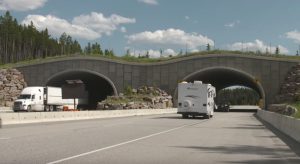 The highway through Banff and Yoho national parks is already dotted with animal overpasses, but they all bridge the road with two smaller arches, supported in the middle.

But tigh topographical restrictions around the new Yoho overpass meant a double arch wasn’t an option. Instead, Belvedere had to find a way to bridge the entire highway (four lanes of traffic, plus two merging lanes) under a single, yawning archway.

According to Holkestad, the massive structure is 33 metres wide at its base, with a 40-metre-wide archway stretching 60 metres over the highway.

The team from Belvedere spent the summer putting it into place, piece by piece, as they worked around the tourist-season traffic flocking to the park.

“You stop them for a minute and they’re backed up for miles. It’s just a huge feat,” he said.

With weight restrictions on the structure itself, and traffic constantly zooming by, the team had to bring in special equipment (including an excavator that could unload its cargo nearly 20 metres away) to help move into place the massive panels that make up the overpass

“Each one of those arch panels weighs 50,000 pounds, and there’s 100 of them–50 on each side–so it’s quite a magnificent project, and a big engineering structure,” Holkestad said.

While Belvedere had built bridges in the past, Holkestad explained an arched overpass is an entirely different beast, and the groundbreaking project had to be tackled carefully.

“It’s actually totally different. This was something that was new for all the parties involved. It’s not very common to go and be putting arch panels up like this,” he said.

However, Holkestad said the project went “exactly as planned,” and Belvedere finished the core structure a little more than a week ago.

Belvedere will return in the spring to plant vegetation along the crossing, but according to Parks Canada, it may actually be years before animals feel comfortable using it.

Parks says there is a “learning curve” for animals using wildlife crossings, and for certain species it can take as many as five years before they feel safe setting foot on one.

Nevertheless, wildlife crossings have proven to be quite effective, and there are now dozens of them dotting the highway through Banff and Yoho National Parks.

All told, the crossings were used more than 150,000 times during that span.

For more information on the new overpass, check out the project details on Belvedere Place Contracting Ltd’s website.