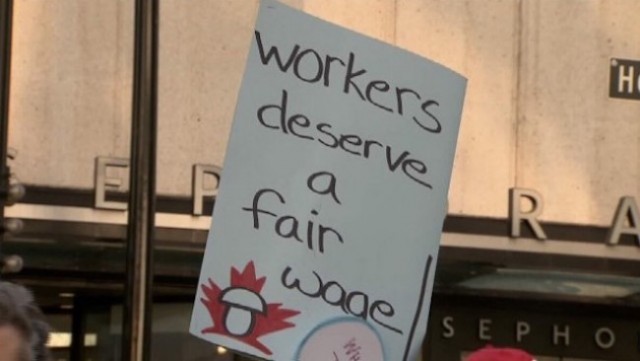 Businesses in Penticton appear to have no single voice on how to deal with the minimum wage, as demands return for a bump to $15 per hour.

Leadership in the Penticton and Wine Country Chamber of Commerce and the Downtown Penticton Association gave some input on the question, as a provincial campaign sets its crosshairs on the minimum wage.

A statement from chamber president Michael Magnusson indicates some level of openness to a $15 per hour minimum, but asks that any increase comes with warning.

“The Penticton and Wine Country Chamber of Commerce believes that every worker is entitled to a living wage, but any increase in minimum wage, whether it’s 50 cents or up to $15 per hour, must be announced with at least a year’s notice,” Magnusson said.

That notice, he says, would provide employers with an opportunity to account for a bump to the minimum in their own budgeting. A large increase could lead to businesses with “already slim margins” looking at ways to slim down even further, including higher prices or reduction of service.

Communication, he adds, shouldn’t be a one-way street on the issue, and he encourages the government to engage “all stakeholders” on the pros and cons of raising the minimum.

The DPA provided some comments from members of its board, which ranged from cautious sympathy to a more blunt look at the impact on business.

“I also have reservations about simply upping a minimum wage to this amount,” wrote one respondent. “That being said, I think that that expecting someone to live on $13 per hour, or worse, a liquor server’s wage, and to depend on tips is pretty hard for someone who might also need to cover rent & childcare.”

“At the entry level positions, this will reduce employment and increase prices on everyday basic necessities, eroding the increase,” another said. “Personally, this would either increase my prices by 20 per cent, or decrease staff hours by up to 80 hours a week. It’s a lose lose.”

The B.C. Federation of Labour’s campaign heading toward the May 9 election is focusing on numerous issues, including the minimum wage, which it hopes to bump up to $15 per hour – a view shared with the BC NDP.

BCFed president Irene Lanzinger says an increase to the minimum wage, if done slowly and with consideration for small businesses, can increase business in that jurisdiction. She points in particular to Seattle, where a gradual increase to $15 per hour is set to be completed in 2018.

That, she says, is because more people who are working on the minimum are able to spend more money within their community.